Nothing to do with Bruce Lee, this is all about hang gliding.

Having had to endure 4 lesson cancellations over almost as many weeks, the British weather finally decided to give me a break.
Having called the flight line and confirmed that the weather conditions were suitable, I set off on the 1.5 hour journey to the training site via the M25 motorway.

On arrival I was welcomed by Andy Shaw the Chief Flying Instructor at Green Dragons and Trainee Instructor Eddie, there were 2 other students already there, with 2 others expected so we settled into the waiting room and watched a flying video. I later found out I was the only hang gliding student, as the others were learning to paraglide.

At 09:30 with no sign of the other 2 students we began the paperwork (I had to fill in a new student task book, but since I had photocopies of my Lejair training, Andy was able to have a rough idea of where I was supposed to be), followed by a safety briefing.

I chose a helmet and harness, picked up the Stubby hang glider and walked the long road (200m) to the training hill. This was the first time I had single handedly carried a hang glider, and it was the beginning of a morning of hard work. While Andy cleared the field of some obstacles see picture, I rigged the hang glider and performed my daily inspection (SWANK), Andy joined me later checked I had performed my inspection properly, asked what my pre-flight procedure was and I replied 'Will Geordie Have His Cat Abroad'. Once I had convinced Andy I knew what I was talking about, we went through a site briefing and the local weather conditions.

My first training task of the day was ground handling as I was not confident I could handle a glider under normal UK windy conditions.

I then proceeded to practise my hill launch techniques which was none existent as most of my flights had been tow launched. While pushing the glider up to the middle of the slope where I had been launching from, the wind flipped the glider over (didn't you start the day ground handling?), and had to wait for Andy who was teaching one of the Paragliding students to help me put it upright, he then gave me a few tips on keeping track of the wind direction and making sure the nose is always into wind.

By noon I had picked up the correct launch techniques, and Andy was happy to let me fly the glider, but first I had to get the glider up the hill (this is the bit I don't like), the last 50m was steep, and I couldn't move the glider (well I had been trying to out run the glider earlier perfecting my hill launches), so Andy kindly stepped in and helped carry it the last 50m where I again practised some more ground handling before taking of on a 15 -20 sec flight down the hill. I had a second flight from near the top of the hill, the wind by now was getting a little variable, and I had to wait around a bit before finally taking off for another 20 sec flight. The flights themselves were event less, and I was happy to know I hadn't lost any of my pitch or direction control skills, and the landings were very easy in the 5-10 mph winds.

It's time for a lunch break now, so we took an hour to eat and re-hydrate, hoping to be back on the hill around 14:30, however this was not to be as the conditions got worst being very termic, winds were much stronger and it remained so till about 18:30 when I left, I had waited that long because Wednesday was winching day for the Green Dragons Club, and was going to take the opportunity to have some tows in the evening.

I've now booked Monday 23rd for another training session, and am looking forward to working with Andy or one of his other instructors weather permitting of course. 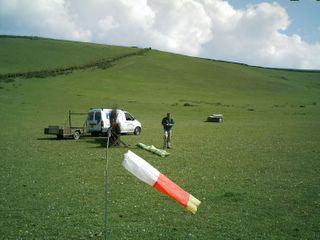