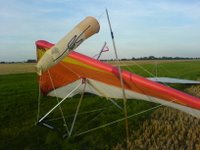 This is about my first few independent solo hang glider flights at my gliding club the Suffolk Coastal Floaters hang gliding club on Saturday the 9th of September.

The weather forecast for the day suggested a moderately strong easterly wind, so it looked like a fair day to get in air, and for the first time totally be pilot in command, no gliding instructor telling me what to do. Obviously the club has coaches who look out for new members, and guide them through their early flights, so I wasn't on my own nor would they allow me to fly if conditions were not suitable for my skill level.

I arrived at the Mendlesham flying airfield shortly after midday, and had to wait for other members to arrive (I was obviously keen)! Two hours later everything was set up, and I had rigged and fully checked my recently acquired Airwave Calypso aircraft. By now I was feeling apprehensive and nervous about the whole thing. I was flying with people who I'd never worked with before, and the hang glider was also new to me! A few of the more experienced pilots had already had a flight, and the report was that the air was smooth, so I was advised now would be a good time for a flight. I moved my glider to the launch point, carried out my pre-flight checks, hooked up the towline to the my chest bridle, had a briefing from one of the coaches, and was ready. I informed the launch marshal to ask the winch to take up slack on the line, went into the hold position, checked my wings were level, and ordered 'All out' to begin the launch. Within a few seconds I was in the air, but things weren't going well as the glider was off the towline veering left, and I wasn't on top of things, so the winch operator cut off all power, and I came in for a landing. I probably got to about 40ft on that one! The coach came over to explain that I had dropped a wing just as I launched, hence the direction problem.

There was still a lot of runway left, so we decided to launch from where I had landed. This time I got off well, and was rising in the air, but I was struggling with the glider to keep it pointed at the winch. I got to about 100ft or so, and decided to release the top line, went for the release hit it, and the glider veered off to the right, I noticed the loss of tension on the line, so I knew I was in for another landing. The line was still attached to my glider, so I released it. This time I had a longer glide down to the ground. Analysis was that I was flying too fast (probably due to that fact that I was tensed up, and thus all my correction movements were exaggerated. I now faced a long carry back to the launch point, which was about 150 metres or so. by the time I was almost there I was totally exhausted, and was very grateful to Paul a fellow pilot who offered to help me with the final 20 metres. I had a long rest, while I mulled over what had gone wrong, and the words of encouragement from all the pilots around who could see from my face that I was disappointed. 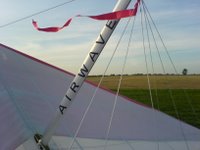 One and a half hours later I was ready for another flight. I was still nervous, but knew what I had to do, and this time I got in the air, and had my first complete flight. I was still tense, but not as when I started, and by the time I released my glider from the tow line, and was free flying, I could relax a bit and start to get acquainted with my glider. A few minutes later I was on final approach to land, a pilot shouted 'pull in', I responded and landed without any problems.

I went on to have 4 more flights, all of which went without incident, the last one of which I specifically requested even though the winch man was about to pack up for the day. I was now happy with the glider, and just need to gain a bit more confidence in the launch process, as I still feel a bit nervous each time I hook the tow line onto my glider.
I am now looking forward to many more days of flying as I gain airtime and experience in preparation for the next milestone of my hang gliding adventure challenge.

To see how hang gliders are towed into the air at the Suffolk Coastal Floaters Gliding Club, play the video below.

Thanks, I felt I was there along with you (you doing the hard work, of course)!

Congrats...now you begin the learning process...It is the journey that is the joy. :)

nice blog - wish you every success on your adventure!

Just great to follow your dream! I read some articles and I strongly believe in you being succesfull.
I'm from Holland and wiches you many safe flights.
An other quote:
I ask people who don't fly, "How can you not fly when you live in a time in history when you can fly?"
- William Langewische