Here is a full report of my hang gliding trip to Algodonales, Spain. 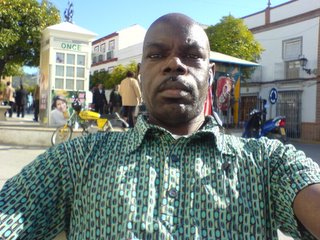 After breakfast I met Tony Webb at his workshop where Rona finished off the paperwork for my hang glider training, and we loaded the van with the gliders and the necessary equipment (training harness) to enable us to go tow launching today. Tow launching involves attaching a cable to the hang glider and pilot and then pulling both into the sky. The advantage of this is that given a large enough field, training can take place irrespective of the wind direction, whereas if training on a hill, the wind needs to be blowing up the hill in the right direction for training to take place.

I am joined by a local Spanish lady Laura who has had some previous hang glider training, so I won't be alone today. We head for a village called Moron, where the field to be used for training is located and rig (setup) our hang gliders. I am the first to fly, was a bit apprehensive, even though the flight was a simple straight flight across the field at about 20 feet. The local Spanish lady takes her turn and also gets across okay after a few teething problems with her glider release system. I went on to do about 7 flights, with the last one at 50 feet, and I was releasing the glider from the tow line and doing shallow turns before landing. At the end of the day, I was fully confident with the glider and was now fully back at the skill level I was when I finished training in March of this year. 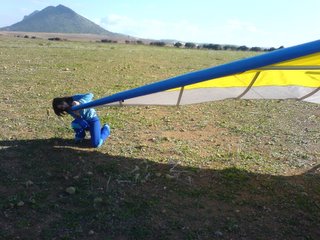 We are at the hang glider towing field in Moron again, but I'm the only one harness training today, my first flight of the day started okay, but the landing was poor, looked like I was still asleep. After that false start, I went on to do 9 further flights including 7 circuits (where I take off to a height of about 250 feet, release the tow line and then land as close to take off as possible). A good day, and much progress made with training. 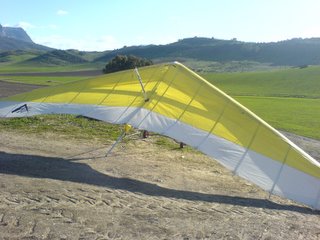 We arrive at the towing field with dark clouds looming in the distance, I rig the hang glider with a fresh breeze blowing across the field.

Lijar is the local mountain in the village of Algodanales, and I got my first taste of this flying site in March, during my first training visit to Spain. As with the first time I flew from this site, the nerves kicked in, as I do have a little fear of heights, especially when I have to look down. By the time I have rigged the glider, done my daily inspection of the aircraft and my pre-flight checks things have settled a bit, I do a couple of dry runs to make sure I haven't forgotten the proper procedure for a hill launch and I'm off! The launch goes well, and I'm in the air floating gracefully away from the hill, once I've moved far enough from the take off point, I change into the prone position (lying down flying position), practise some turns, even do some 360 degree turns, a bit too sharply, so Tony tells me to stop, and we then do some stalling manoeuvres where I push the control bar forward gently, I notice the drop in air flow, feel the sluggishness of the glider, and then finally the nose of the glider drops as it stalls completely and auto recovers, I do this twice and then head for the landing field. I setup my approach, and just like my first flight off Lijar forget to lower my landing gear, so land on the wheels and my knees. No damage done, and apart from the landing everything goes according to plan. That was my qualifying flight, and I still have two more days of training, I'm over the moon!

We have lunch, and then go to a different hill for a soaring flight, but my hill take off was very bad, with me using too much airspeed, and quite close to hitting some rocks on take off. I attempt a bit of soaring, and then proceed to land some 10 mins later. Tony my instructor has some strong words with me, advising that what I did was very dangerous and I SHOULD never do that again. I go to bed that night pondering on the day's mistake. 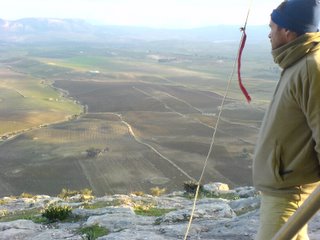 Having earned my Club Pilot hang gliding rating yesterday, and making a mistake on the same day, I was not really interested in taking another flight off the top of Lijar mountain, and would have preferred doing some more practise of hill take offs from the training slope, but Tony advised me to take the flight as he was sure that I had learnt my lesson, and that I was fully able to launch properly from a hill. Rona was also going to fly today, so we went to the top of the mountain, I rigged the glider, and when the conditions where right, I made a perfect hill launch, fly away from the side of the mountain, made some nice gradual turns, and found a thermal (column of rising air) and made some 360 degree turns in it, gaining a bit of height, and also experience the falling feeling you get when you lose the thermal as well. I did this for a couple of minutes, then headed for the landing field where I set up a nice approach and landed gently with a good flare. This was the most enjoyable flight to date, and had lasted for about 22mins. I was grinning from ear to ear, the icing on the cake being that I had a longer flight that Rona, as by the time she launched, the thermal has disappeared and thus was only able to get about 15 mins of air time. 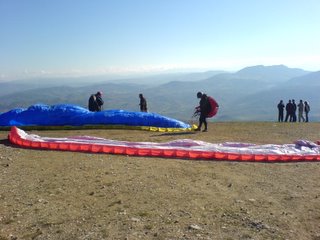 We had lunch and went back to the training slope where Tony introduced me to the Doodle Bug powered harness, did some ground school for powered flying, showed me how to rig the engine to the Aeros Target hang glider and then gave me a flying demonstration of the unit. After about 15mins in the air, Tony landed, switched the engine off, I clipped in and proceeded to do 4 un-powered runs in the aircraft. I was totally exhausted, but loved the whole experience, at last I was much closer to achieving my dream. By the time we un packed and put everything away, it was already dark, but I didn't care, I had just been introduced to the aircraft that would make my challenge to fly a hang glider across the UK possible!

It was my last day in Spain, but since my flight was late in the evening, there was time for me to meet with Tony in the morning to complete my training paperwork, do some more powered flying ground school (mainly revising what we went over yesterday, emphasizing safety) and then drive to Villa Martin where I had the opportunity of rigging both the Target and Doodle Bug with some help from Tony of course, we then when on to do 5 powered runs, learning the proper procedures for take offs and the abort procedures where you spit the mouth throttle out of your mouth. On the 5th powered run, things where going well, and Tony did not give the abort signal for a while, so I gradually increased the power, before I knew it, I felt my feet leave the ground, Tony signalled abort, I spit out the throttle, and flared the aircraft as my feet landed back on the ground, I had just flown the Doodle bug for a whole 3 seconds! Tony said we should end the day on that good note, and I totally agreed. Not only had I come to Spain to complete my hang glider training and obtain a club pilot rating, I had begun the third and final step of my training for my challenge. Though I will probably have to go through most of what I done with another hang gliding instructor when I get back to Britain, I had more than surpassed my dreams for this trip. A big thanks goes to Rona and Tony Webb of Lejair Ltd harness training school, Algodonales, Spain for all their hard work during my two flying trips. 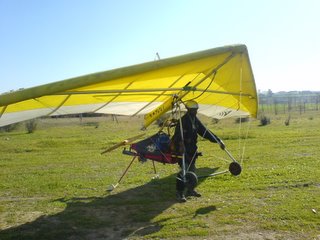 You looked like you had a lot of fun! Sigh, the view from the pictures were spectucular! oh well congratulations on your handgliding experience!

Ps; my email address can be seen at the right side of my page:
Email me here

This is an excellent blog. Keep it going.You are providing
a great resource on the Internet here!
If you have a moment, please take a look at my air france flight tracker site.
Have a great week!